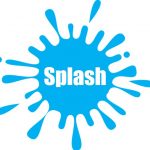 We are missing getting together during this Coronavirus lockdown so here’s some bible learning and fun for you to do at home.

The very first Christians were Jewish, the same as Jesus. They thought that God only sent Jesus for other Jewish people. In today’s story, Peter found out that Jesus came for everyone. Watch the video to see how God helped Peter to understand.

Now choose one or more of these activities.

Now decorate it with as many different people as you can.

Thank you, God, that you love me very much, even if sometimes I don’t do the right thing. Thank you that there isn’t anyone anywhere that you don’t love. Thank you that Jesus came to show us how much you love us all. Amen

Peter and John heal a man

This week we start to look at some of the stories in the Bible in the book of Acts. They happen soon after Jesus had gone back to heaven and his friends started to tell other people about him. This first story is about two of Jesus’ friends, Peter and John. They were on their way to the temple, a bit like us going to church. In those days, if people couldn’t work they had no money, not even enough to buy some food. The only thing they could do was to beg. Peter and John met a man who couldn’t walk, so he was begging for money outside the temple.

Watch the video to see what happened.

Now choose from these activities

(Adults, apologies for the short advert at the beginning. I think you can skip it.)

Thank you, Jesus, that you gave Peter and John your power to heal the man that couldn’t walk. Peter and John didn’t have any money to give the man, but they gave him something much better. Help us to remember that you can still make people better today and we can praise you like the man did. Amen

David spent years having to hide in caves with his men to stop King Saul from finding him. Eventually, King Saul and three of his sons died in a battle and David became king. David often thought about his friend Jonathan, who had helped him to escape. They had promised each other that they would always look after each other’s family. Now that Jonathan was dead, David remembered his promise and wondered if there was anyone left from Jonathan’s family.

Watch the video to see what happened.

(Adults – the reference at the beginning of the video says 1Samuel. This story is actually found in 2Samuel chapter 9)

Be kind and loving to each other

After God helped David to kill Goliath, the people thought he was a hero! They cheered him and made up rhymes and songs about him. This made King Saul very jealous and angry. He thought the people should have been cheering him and calling him a hero. After all, he was the king! From that time on, sometimes he treated David well and sometimes he was got very angry and hated David. David had gone to live in the palace where he met Jonathan, King Saul’s son. The two of them became great friends.

Eventually King Saul became so angry that he tried to kill David. It wasn’t safe for David to stay at the palace any longer so Jonathan helped him to escape. David and Jonathan promised each other that they would always stay friends and that they would always look after each other’s families. David went into hiding in the hills and caves with some soldiers who were on his side. Often King Saul would go out with his army, looking for David.

Watch the video to see what happened next.

Dear God, sometimes things worry me and make me feel a bit scared. Thank you that you are with me, looking after me all the time. Please help me to remember how much you love me. Amen

After Samuel had visited David and his family, life carried on as normal for a while. David carried on looking after his father’s sheep. Sometimes he had to protect the sheep from lions and bears and he got very skilled at using his sling and stones to fight them off.

Watch the video to see what happened to David next.

Link to David and Goliath Join the Dots Sheet 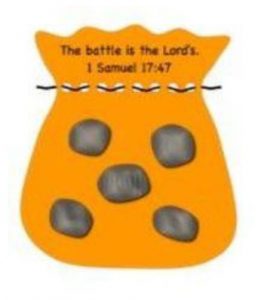 You could use your own paper to cut out the shape of a bag that David might have put his five stones in. Draw and colour five stone shapes and stick them onto your bag. If you have some wool or string you could stick some at the top. Now copy the words from the Bible at the top.

Go outside and collect five stones to remind you of how David trusted God. David would have chosen smooth, rounded stones as they would fly through the air better than rough ones. Can you find smooth, rounded ones too? When you look at your stones think about how God looked after David and how he looks after you as well.

Here is a prayer, or you could make up your own.

Thank you God that you love me and always look after me. Thank you that whatever worries me, you are always in charge and nothing is stronger than you. Amen

This month we’re starting a series of stories about David and some of the people he met during his life. When we first meet David he’s a shepherd boy, looking after his father’s sheep. This was a rough and hard job and David had to do it as he was the youngest and least important member of the family. Let’s start to find out about David, and what God thought about him.

Choose one or more of these activities.

This means that God thinks that it doesn’t matter what someone looks like, it’s what kind of person we are that matters. Are we kind or unkind? Do we tell the truth or tell lies? Do we help other people or not? There are lots of other things that you could think of, I’m sure.  The most important thing of all is whether we love God and try to do what pleases him. This is what God really wants to see when he looks at us.

Print out this sheet.

Link to God looks at the Heart colouring sheet

Cut off the words, then cut them out to stick in the right places.

Dear God, thank you that you know me and you always love me. Thank you that you don’t worry about what I look like, you want to know whether I love you. Please help me to try to be the sort of person who pleases you. Amen

Update Personal Details
Your ticket for